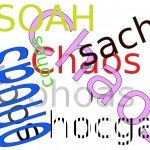 ‘Only fools try to find order in chaos’

For some time I’ve been arguing that the U.K.’s political system is so totally corrupt and unrepresentative that the only option is to turn the system upside-down. At the moment all the power is concentrated at the ‘top’ in Westminster and its discredited party structure. Instead, we should focus power on the grass roots, meaning ordinary people with ordinary concerns. This is what ‘Engaged Buddhism’ is all about.
I’m now beginning to realise that my own focus may have been unduly distorted by my cultural inclinations rather than the political reality as reflected in the results of the referendum. This is our mathematical way of determining democratic decisions. I should accept the outcome even if it shakes my political ‘certainties’ to the core. The political system has been well and truly turned upside-down so adapt to the new circumstances. Isn’t this what I wanted? Maybe I should rethink my responses to the new world of chaos and confusion. The Buddha warned us of the unsatisfactoriness (or dukkha) of the existential system we live in in.

This sparks a whole catalogue of random questions with Buddhist implications. So here goes:

1. Maybe the U.K. has rightly reacted against the centralisation, bureaucracy and obscure processes of the E.U. The prime culprit is the European Commission. Could it be that instead of uniting its disparate countries, it has legitimised the domination of an elite? Is this democracy or aristocracy? These elites should not have been shocked by the exit vote. The establishment was too out of touch to know how angry many people were.

2. Here’s another puzzle for democrats. Roughly half of voters chose ‘Remain’ and the other half chose ‘Leave’. The difference dividing the country is just a few percentage points. Is this enough to justify such a profound convulsion? Originally I described the ‘Leave’ faction as idiots. How could I have been so arrogant to denigrate half the country as stupid?

3. The referendum required a Yes/No response. This is a crude dualism. A multifarious issue which determines the destiny of a whole nation simply cannot be reduced to such a primitive method. So how could the will of the grass-roots have been monitored more accurately? One answer could be sortition, which means choosing your rulers by picking them at random. The Greeks practised this in ancient Athens and we use it to choose jurors. Could anything be worse than the present system?

4. Is the referendum legally binding? This is a question for constitutional lawyers but we might offer our own opinions.

5. Another question (from a party leaflet) : ‘What has the E.U. ever done for us?’ It then lists a wide range of suggested issues which we would not have been capable of resolving without European intervention, from animal welfare and climate action to data protection and tax justice. It’s true that Britain needed to be nudged and even coerced by the E.U. into tackling them. But we have a long and honourable history of liberalism which would, sooner or later, have righted many wrongs. Couldn’t we have done this without the help of the E.U.?

6. Next, what can we say about the use and abuse of language by referendum campaigners? Right Speech? Words fail me.

7. The situation is changing day by day. The world is in a state of constant impermanence. This is not the end. Question: Can there ever be an end?