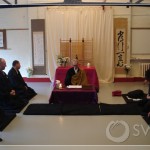 Imagine, where we sit in zazen every week in Liverpool was once where Bill Nighy, Julie Walters, Pete Postlethwaite, Jonathan Pryce and many other famous names in British film and theatre rehearsed when the Everyman had a repertory company. In 2002 when Sensei and I took over what is now StoneWater Zen Centre, it was the Red Room and, along with the neighbouring Green Room, it had been the Everyman’s Theatre’s rehearsal space. Then, it was a single large space with a wooden floor – there was no sangha or interview rooms, no small zendo, and no cushion vinyl floor either. When I first walked into Narnia I walked into a rack of coats, which is how this large storage room got its name. It was full to the ceiling with the props and costumes of two theatre companies and you could barely move in there.

I was Sensei’s new Zen student and we took over the space because Sensei needed a place on two evenings a week for his karate club and I needed more space for my growing shiatsu school, plus I needed two therapy rooms where I and my students and teachers could work. At first it wasn’t for the Zen group at all – then we sat twice a month in Sensei’s flat.

Sensei and I had it repainted floor to ceiling, we had the two smaller offices built and had the special vinyl flooring laid; the Dojo was born. We inherited the 5 Rhythms group, who were already dancing there, and I sought other compatible tenants to share the space. From the very beginning we have depended on renting out the space to other groups, otherwise we could never have afforded such a prime central location.

Fairly soon after we established the Dojo, Sensei moved the Liverpool Zen group there and we began to meet weekly. A group of us joined from 2001, including Miranda, John and I, and we could no longer fit in Sensei’s small flat. Then our form was very basic: we only chanted the 4 vows, there was no service, and every sitting began with 27 full bows (you could really tell Sensei was a martial artist!) – and these were fast bows too!

The Zen group continued to grow; we added an extra evening, then morning sittings, then as a sangha we built the Zendette together. That was hard work but a wonderful example of a collective enterprise that really illustrated what sangha means.

I was reflecting on all this during the Rohatsu retreat in December which was held at SWZ Centre Liverpool. Looking round I realised that there was very little in the Centre that we as a group hadn’t designed, bought, built or carried up those stairs many times. A large and important part of my life and the lives of other members is invested in this space – personal, financial, professional and zen.

Zen practice is so wonderful, so life affirming and life changing, that it must be made available to people and the Centre has been our way of doing this.

As we reflect on Beginnings it feels important to acknowledge the history of the space we use and the work we have done together.