A message from Keizan Roshi with an invitation to the (online) Shiho Ceremony for Simon Kogen Heale from 7pm on Saturday, 19th March

Dear Folks,
I am pleased to announce that I will give Denkai and Shiho transmission to Simon Kogen Heale on the evenings of 18th and 19th March , 2022. There will be a Zoom sitting on the Saturday evening followed by Zoom access at the end of the transmission to see Kogen receiving his robes and the ceremonial gifts that mark his becoming a Sensei within the StoneWater Zen lineage. I hope that as many of you that can will join us for this special occasion.Below are details of the Zoom link and a biography of Kogen’s personal and practice history.
The picture is of Kogen at his Shuso (Head Trainee) ceremony at ‘Yokoji’, Zen Mountain Center, California.
Gassho,
Keizan Roshi 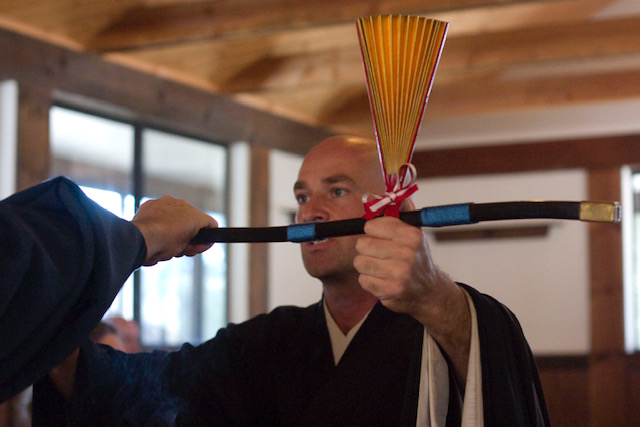 Being brought up as part of a Quaker community gave me my first experiences of sitting with others in Silence. In my teens, a growing interest in Buddhism led me to Asia. Cycling overland across China and eventually to Tibet and living in North India gave me a deep love for Tibet, although I gravitated more to the simplicity of Vipassana practice. Coming back to the UK in my late twenties I continued to practice Vipassana before encountering Chan/Zen for the first time with John Crook at the Maenllwyd in Wales. In 1999 I sat my first Sesshin with Kanzeon Sangha where I met Genpo Roshi, Tenshin Roshi and Keizan Roshi. I participated in several Sesshin with Keizan Roshi, often as Tenzo, before moving to the states to study with Genpo Roshi in 2002. I came back in 2010 and began to train as a Core Process Psychotherapist with the Karuna Institute in Devon whilst also working as the assistant director of a mental health charity in east London and continuing Zen practice with Keizan Roshi. I now live in Shefield with my partner Emma and Lila who is nine and I work as a Psychotherapist. We are all keen cold-water swimmers, some a little keener than others and enjoy walking, cycling and exploring the peak district and further afield. We also enjoy cooking, pickling and baking. Meeting Keizan Roshi first in 1999 and our Dharma relationship having deepend ever since, I feel very grateful to Keizan Roshi and all of my teachers to be receiving Shiho now on ‘home soil’
In Gassho,
Kogen