Just some reflections on a Saturday morning…

I was watching a video about Shariputra – a fascinating video that explores what we know about the man himself, who he studied with before meeting the Buddha, his role in the Buddhist sangha, his enlightenment… and mostly has utter fascination with the Dharma that led him to be declared by the Buddha himself as the wisest among the Sangha. Indeed, in early Buddhist traditions, Shariputra is considered to have been the Buddha’s chief disciple, senior even to Ananda and Mahakashyapa. If you’re interested, it’s part of Doug Smith’s “Doug’s Dharma” series of videos on early Buddhism, and can be found at https://www.youtube.com/watch?v=WcIdaTnraXM

This is all well and good from the perpective of early Buddhism, but it’s interesting to note how Shariputra is positioned within Zen Buddhism, as there are some important differences.

For a start, the ‘transmission of the lamp’, the blood-line lineage of the Buddha from teacher to student started with – according to Zen’s foundational myth – the wordless recognition that passed between the Buddha and Mahakashyapa, in what we now know as the “flower sermon”. Not Shariputra, the intellectual, the ‘librarian’ of the early Sangha. Doug Smith points out that Mahayana practitioners often miss that in the Prajna Paramita Hrdaya Sutra (yep, that one that we chant so often!), Shariputra is the object of the lesson being passed on, and not, in fact, set up as the wisest of the disciples as he most certainly would have been if the sutra came from an earlier period of Buddhist thinking.

So is there, hidden in plain sight right in the first lines of the Heart Sutra, a nasty piece of sectarianism? And the answer is, in one sense, yes! Doug Smith points out how this works in the Mahayana tradition to paint Shariputra as a figure of the past, a figure of ossified tradition and meaningless intellectualism, compared to the Mahayana tradition’s embodiment in the figure of the sutra’s proponent, Avalokiteshvara, the Bodhisattva of Compassion. In short, encoded into the cast list of the Heart Sutra is the subtle message that, in the polemic terms of the day, Mahayana trumps Hinayana.*

If this sits uneasily with you, then… good. I think it should! At the same time, though, we need to resist the urge to leap to judgement, lest we end up committing the same ad hominem attack against the author(s) of the Heart Sutra as they are making against Shariputra.

So, is there some more fruitful way of engaging with this? And of course, the answer must be: what does this say about my life and my practice? How can I get from this some insight into the conditions of my own existence?

For me, the promotion of Avalokiteshvara and the relegation of Shariputra is a clear reminder to hold lightly to the “thicket of views” that seems to form the content of much of my conscious position about the world. What I think is right, what I think is just, what I think about this politician or that politician, about this or that social injustice. In the Aggi-Vacchagotta Sutta in the Majjhima Nikaya, the Buddha warns against getting caught in any one position, that this is:
…a thicket of views, a wilderness of views, a contortion of views, a writhing of views, a fetter of views. It is accompanied by suffering, distress, despair, & fever, and it does not lead to disenchantment, dispassion, cessation; to calm, direct knowledge, full Awakening, Unbinding. (https://www.accesstoinsight.org/tipitaka/mn/mn.072.than.html)

So, I consider the mess of conficting opinions, half-formed prejudices, well-intentioned stupidities and poorly justified yet fiercely defended positions that seem to characterise the things that I believe… and in this light, it’s easy to see how these so-strongly clung-to positions are a wilderness, a thicket, that cause suffering and division, rather than healing it. Even my most deeply-held beliefs, the ones that I know in my heart of hearts are good and true and beautiful, these too can be a cause of division and hurt, can be seen by others as an attack on their own, differing views. In the Aggi-Vacchagotta Sutta, the Buddha concludes by discussing how not to cling to views, and how this leads to nirvana. And I’ll give it a go, but I think that simply “doing away with” positions, as the Buddha suggests, might be a bit beyond me right now!

So what instead? And it is here that the example of the Bodhisattva of Compassion stands to provide a practical alternative. Avalokiteshvara, or as more commonly known to us in Japanese Zen, Kanzeon. Sometimes depicted with a thousand eyes and a thousand hands, and referred to as ‘she who hears the cries of the world’, Kanzeon is a figure we can aspire to that is attuned to the world, and informed by her great wisdom and compassion, is empowered to act within the world to reduce suffering. 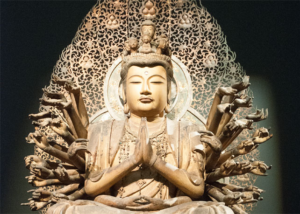 Shigetsu’s koan for his Shuso Ango this summer was #89 from the Blue Cliff Record, which refers to using those thousand hands and eyes “like someone in the middle of the night reaching behind her head for the pillow.” This is a compassion that springs naturally from us, and much of what we have to actually do to manifest this compassion is to get out of the way of our original selves! The thicket of views that I get stuck in paralyses me, and I end up questioning myself endlessly, and never doing anything.

I’ve learned a lot about Shariputra today, from Doug Smith’s video and the other reading it’s led me to, and as ever I’m always grateful to learn these things. I’m just like that, I enjoy knowing stuff. I love my thicket of views! But as ever again, what will stay with me is not the fascinating historical detail, or learning about the Buddhist culture wars of the first centuries of the common era… it’s how it has to come back again and again to my own life; how I choose to live it, seeing how sometimes I sabotage my own activity in the world, and being encouraged again to engage with what’s in front of me here and now.

* Honestly, I try as much as possible to avoid the term Hinayana because there’s no way it can’t be a put-down, and I’d encourage others in this too. Instead, if talking about the modern school, refer to Theravada, and if looking for a term to talk about the early, pre-Mahayana traditions (of which the Theravada was only one of eighteen traditional sects), the more obscure term sravakayana (vehicle of the hearers) serves.