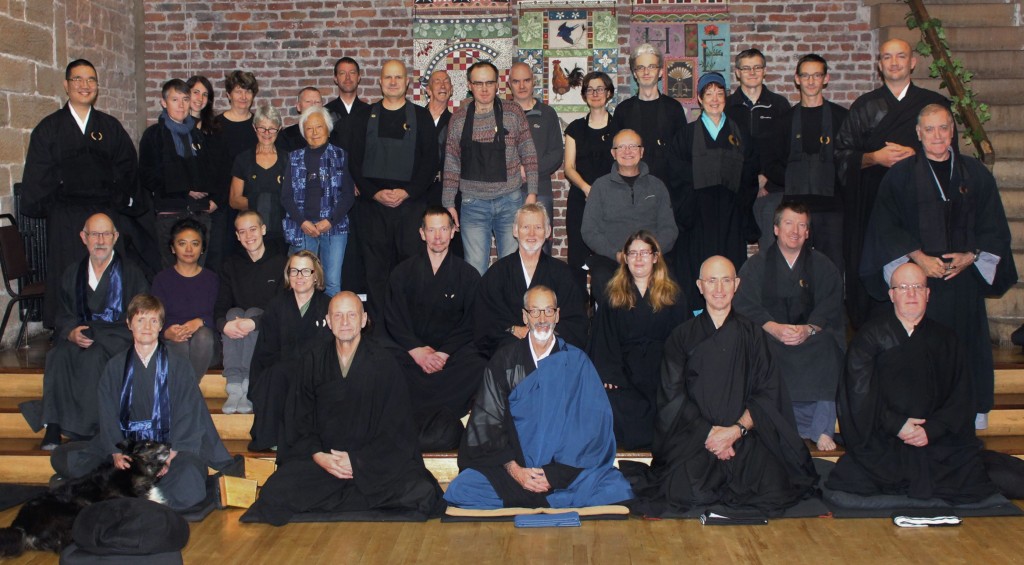 ‘This is it! Tonight is the night!’

On the fourth and penultimate night of the autumn sesshin, I was going to undertake an all-night sitting as per the practice of meditation retreats in many Buddhist monastic cultures. I had been slowly building up the number of hours that I sat in zazen so that I would be up to the task for this night. I drank a mug full of strong coffee, ate a couple of chocolate biscuits for fuel, and resolutely walked towards the zendo.

The zendo at night has a magical atmosphere. As the lights go out, there is only minimum light that shines through from the corridor, and everything is bathed in darkness – a mixture of black and grey without any discrimination. There is no coming and going of people going to their interviews, no birdsong, no sound of airplanes, and above all, no one around you, with rows of empty zafus. (Except Paul, my night sitting friend, who eventually retired at midnight that night.) You are completely and utterly alone, far removed from your familiar home environment that might lure you away from your determination. In this near-perfect manifestation of emptiness*, the only thing to do is to sit in zazen.

Jez, our jikido, hit the han to announce bed time at 10 pm, and so my sitting began. I wish I could say that I experienced an amazing breakthrough and attained anuttara-samyak-sambodhi; or the Lotus Buddha descended from the formless heaven together with Bodhidharma to hand me a scroll of inka for reaching the highest and innermost Truth of Buddhism. Of course, as you would have guessed, no such things happened. The one entity that did descend from high above was Jez, who came down from his sleeping quarters in the loft by the zendo to go to the bathroom at about 2 am. However, he did not even cast a side-glance at me let alone inka-approval of anything and, having finished his business, swiftly ascended back to the higher plane of existence without leaving any trace.

Instead, I was first tired, then in an increasing amount of pain, then finally hungry, which had all been expected considering the previous four days of tough schedule. After the initial two hours of ‘productive’ zazen, I had to resort to a combination of rather frequent kinhin and sitting on the chair instead of on the zafu to stop myself from walking away from the zendo altogether. However, what really got me in the end was the cold. It was so cold that my mind and body felt like shipwrecks. I could neither focus my mind nor maintain the correct posture anymore. All I was doing was sitting in agonizing pain with a befuddled mind, and I concluded that what I was doing was more self-flagellation than meditation. Against this overwhelming adversity, I assumed the role of a graceful loser in a valiantly fought battle, and went back to my bedroom to sleep at 3 am, with two hours shy of reaching my goal.

At 5.30 am, I returned to the zendo for the morning sitting. Our ever-present jikido, Jez, was just returning from the wake-up han duty. As I watched him, he put the han down, casually walked over to the radiator, and turned the switch on.

…after a fit of laughter, I realised two things. Firstly, as the radiator was painted in black and was in the shadow of darkness that shielded it from the corridor light, it was completely invisible to me in the previous night. (In all honesty, however, it had not even occurred to me to look for some sort of ‘heating technology’, most likely due to my preoccupation for all-night sitting. I guess that one could argue that in itself is a type of darkness.) Secondly, the chair I had sat on had been in an area of equally intense darkness. I had to grope my way to the chair during the night. As it turned out, it had always been directly in front of the radiator. Clearly, if you are deluded and do not see the radiator, you do not see it even as you sit literally up against it.

This is the best lesson that I took home with me from this sesshin. My fellow practitioners, let me respectfully remind you. Please don’t forget to turn the radiator on. Keep warm, and don’t stay cold** in the darkness of vast emptiness.

I wish you all happy sitting.

*; **: These neglect the ‘emptiness is also empty’, Middle Way aspect of emptiness, but let’s just ignore it for the time being.

Having exerted myself as above during the previous night, my back and knees felt like they were about to explode in the following morning. I therefore abandoned my zafu and instead sat most of the day on a chair with my back supported. Midday on Friday during the Dharma talk slot, the participants at the retreat had the opportunity to share with the group their experiences of the past week, during which virtually everyone (except me!) expressed their gratitude to everyone else for the kindness, support and, above all, simply being there to sit together with them.

The final period of the last zazen session started on Friday evening. For an unknown reason I decided to look up to survey the zendo instead of keeping my sight focused on the floor or my eyes closed as usual. I had a great view from the high vantage point atop the chair in the relatively unexposed position of the back row. While each person had a different face, everyone was sitting like Buddhas, with their heads held high, their backs straight (except me!), their breaths calm, without any movement. They looked content. I was content.

Then Jez got up from his zafu, walked over to the switch and turned the lights off. The only light source left in the room was a solitary candle at the altar before the statue of Kanzeon, and the whole zendo was bathed in darkness much like the previous night, but this time with everyone in their seats. Sensei walked towards the altar, laid another mat beside the haishiki, and announced, “We will chant the Enmei Jukku Kannon Gyo slowly. If you wish, please come up to the mat and bow. In that one bow, drop off all your hope, fear and sorrow.”

After a few seconds, people slowly walked up to the bowing mats one by one and started bowing to the altar. I joined the queue. As I bowed, despite the contentment that I had felt, despite all the previous bows that week, I felt something come up in my chest, and started crying. Walking back to my chair, I heard soft sniffles around me. Once again seated, I stared across the room at the people now sitting in the darkness with the gentle chanting sound of Enmei Jukku Kannon Gyo resonating in the air. They were still sitting very much like how they were sitting before the lights were turned off. Now, however, with their black robes and clothes, they looked like they were slowly dissolving into the darkness at the edges of their silhouettes. Their faces, the only soft oval whiteness that glowed quietly in the dark, were without the features that made them different anymore. If they were sitting like Buddhas before, it struck me at that moment that there really was nothing that could distinguish them from Buddhas now. They kept on chanting while the others kept on bowing, dropping off all their hopes, fears and sorrows. In that darkness with just enough light, everyone was together in the fact of suffering, and connected in their compassion.

Incidentally, although I was too busy crying myself to think about this point, the following is the meaning of the Enmei Jukku Kannon Gyo – Prolonging Life Ten Phrase Kanzeon Sutra, with translation from Bernie Tetsugen Glassman, a White Plum Asangha Elder, and also my namesake.

The Fourth Night Again, and the Sixth Morning.

There is a window by the tea and coffee table in the dining room at the Chet Centre, Crosby, where the StoneWater Zen Centre retreats are held in spring and autumn. Before I went to attempt my all-night sitting as I was preparing myself with coffee and biscuits, I saw a reflection of myself on the window glass. Such reflections are easily seen when it is bright inside but dark outside. Despite this seemingly mundane phenomenon, what I found fascinating that night was the fact that, if I adjusted the focus of my eyes a little bit, I could see different things. While the line of sight remained exactly the same, I could either see the reflection of myself and not much of the outside scenery, or I could see the outside scenery but no reflection of myself. With a little bit of care, however, you can see both the reflection coming from the bright side and the scenery in the darkness at the same time.

Sitting in the final morning zazen period on the sixth day, I reflected on all of the above, and remembered what Kamil shared during that midday session – that the world does have a lot of problems, but it also has so much beauty.

I mentioned above that everyone but I at the retreat expressed their gratitude. It is in fact not everyday that I remember to be grateful for being chanted for by Buddhas and sitting in zazen surrounded by Buddhas. Thank you – for walking the Buddha Way together with me, with everyone.
Gassho.
Woo