A visit to Shinheunsa temple, Korea by Woo-Young Yang 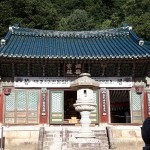 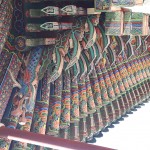 These are some photos that I took from Shinheunsa in Korea, one of the oldest temples that belong to the Zen sect (Seon in Korean), built in the 7th century AD. Unlike the old Japanese Zen temples which seem to preserve the colour of the original timbre and therefore more monochromic, the colour coordination that you see in these photographs are fairly typical of Korean Buddhist temples. In particular, the brightly coloured undersurface of the roof is a striking feature, using the motifs such as lotus flower, blue dragon, other flowers, waves and clouds. 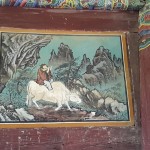 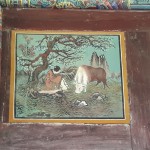 Another interesting universal feature of Korean Buddhist temples is that the Ten Ox Herding Pictures are painted on the exterior walls of the main building(usually the one with the biggest statue of Buddha), starting from the right side and ending in the left in sequence. What caught my curiosity is that, as the ox becomes tamed, its colour gradually changes from dark to white. While I had not noticed this before, apparently this colour change is very common in these wall paintings. Apart from the obvious connotation of purification, it also reminds me of the veneration that the Indian people have for the white cow as a sacred animal even these days, the remnant of which may be depicted in these pictures. 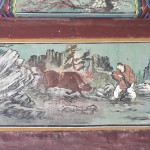 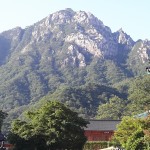 Finally, there is no shortage of precipitous rocky mountains like the one that you can see in the photo(s) in Korea, and I understand that the same is true in China as well. Almost all famous temples in Korea were built on or near mountains, and many ancient Chan masters of China lived in mountainous regions as well. Looking at its severe appearance, it just makes me wonder if the severe teaching methods of the ancient Chinese Chan masters – sometimes even resulting in violent means – might have been influenced by their living environments!