At the end of September Keizan Sensei went to Yokoji Zen Mountain Centre to attend the Shiho (transmission) ceremony for David Jokai Blackwell (above right).  Here is a piece that Keizan wrote for the Yokoji Newsletter which describes how Jokai began his training in Liverpool.

In 1997 I lived in Liverpool, UK, as I still do.  I was busy as a restaurateur and writer and as well facilitated a Zen meditation sitting group affiliated to the Kanzeon Sangha led by Genpo Roshi, my then primary Zen teacher.  Once a year I also organised a 7 day sesshin for Tenshin Roshi – in those days an impressive young Sensei with a wish to carry the dharma to his home country.

The sitting group was located in my home, a large Victorian house once the residence of a sea captain sailing schooners from Liverpool to New York .  Now Zen monks are the cargo!  One evening, quite unannounced, there was a knock at the front door.  I went to open it and there standing on the step was a handsome young man in his twenties carrying a copy of The Elements of Zen, a book I had written.  He introduced himself and told me he had travelled from North Wales, a long journey on a weekday evening for a working person.  He wanted to study Zen.  He had travelled by public transport and owned neither a car or driving license.  He joined us for zazen.  He left promising he would be back within six months with a car and license.  I took it with a pinch of salt.

Six months later virtually to the day he knocked on the door again.  He began to practice with us on a regular basis and attended his first sesshin with Tenshin Roshi in 1998.  At the time Dave worked as a production supervisor in a factory making fridges, he was engaged and buying a house.  By the year 2000 he had given up his job, ended his relationship, sold his house and moved to Yokoji full time and for the start of a three month training period (the same one that Shinko Sensei met his future wife Claudia, also on her first visit from the UK).  He was serious !

For particular circumstances, Dave, now a new father and with the dharma name Jokai, left Yokoji in 2004 and moved to Hollywood.  Without any experience, he found a job as an agent for an Agency specialising in contracts for the creative people working behind the camera of film production.  At one time I was making a radio programme for the BBC and Jokai even managed to get me an introduction to Leonard Coen’s lawyer.  Not that LC ever gave me the interview I wanted.

Five years later as circumstances changed again Jokai returned to Yokoji and gave his full commitment to training with Tenshin Roshi.  A promise he maintained through times difficult both personally and for Yokoji.  The rest you know, Jokai received Shiho (transmission) on Saturday 27th September 2014. 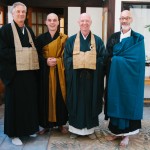